Sam Francis originally studied psychology and medicine. Turning to art, he studied painting under Mark Rothko and Clyfford Still before going to Paris, where he stayed from 1948 until 1950, attending the Académie Léger. In 1952 he had his first one-man-show in Paris and met exponents of French Informel. Accepted as a member of the young European avant-garde, he showed his work at exhibitions in Paris, London and Bern. Participation in 'Twelve Americans', an exhibition mounted in New York by the Museum of Modern Art in 1956, made Francis well-known in America too. During this period his style changed from compositions with the picture surface covered in monochrome values to brightly coloured 'islands of colour' on white canvases. His calligraphic handling of brushwork and the lyrical character of his fluid colour now linked Frances with Far Eastern art, which he studied intensively. In 1957 he travelled around the world, visiting India, Thailand and Japan. His work was shown at exhibitions in Tokyo and Osaka. After moving restlessly between Paris, his home, and other great cities, Francis returned to California in 1962, settling at first in Santa Barbara and then establishing a studio in Venice, Santa Monica in 1963. During the 1960s Francis developed his own distinctive style of Spontaneous and Gestural Dripping. He guided oils, acrylic and watercolours across his canvases with circling and spraying movements. In his 1970s 'grid pictures' the picture surface is covered with rectangular structures. Francis was not only a distinguished exponent of Action Painting. He also explored media such as lithography, etching and monotype. His preoccupation with printmaking led to the production of attractive experimental work in the early 1980s. Forcefully expressive compositions in several parts, some of them with running paint, are the hallmark of these years. In his final phase, Francis executed commissions for large-scale murals. Sam Francis died in Santa Monica on 4. November 1994. 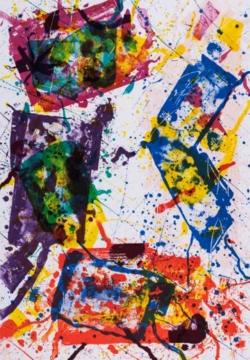 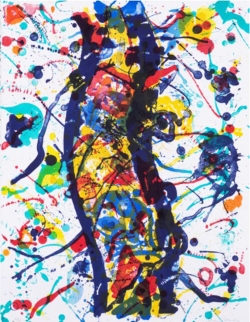 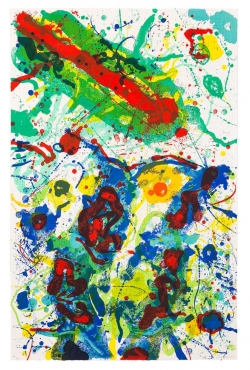 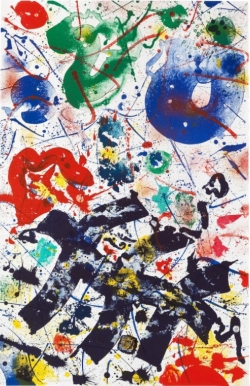