Sultan is a distinguished painter, sculptor, and printmaker, who rose to prominence in the late 1970s as part of the New Yorker “New Image” movement.

He has a unique artistic method and innovative approach to traditional subject matter. Known as Abstract Representation, Donald Sultan´s art is characterised by the use of geometric black forms set against organic areas of bright color, thus bringing an abstract sensibility to his iconographic images of still life.

Throughout his career he has revisited and reinvented still life, using images of lemons, poppies, playing cards, fruits, flowers, and other objects. Donald Sultan’s Lemons, a recurrent theme in his artworks, has, in fact, become an iconic image all over the world. Sultan uses specific materials like “flocking’s” to create expressive and powerful prints that are reminiscent of his forceful paintings. Since his first solo exhibition in 1977, Sultan’s artistic career has progressed rapidly; his works are part of the most prominent public and private collections to be found across the globe. 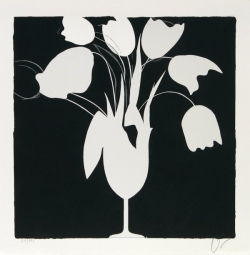