Born on July 9, 1937 in Bradford, England. David Hockney, who has lived in Los Angeles since 1979, is the most important English artist living today. The central theme of his paintings and prints is space: from the intimate close-up views of his early nudes to the broad panorama views of his monumental pictures of the Grand Canyon, executed in late nineties.

In a similar way, Hockney also investigates the temporal dimension of painting in all its extremes: from the momentary nature of a splash of water left behind by a bather after diving into the pool, to the meditative tranquillity and duration of a precisely composed still-life.

Consecutively with his painting, Hockney has engaged in printmaking, often in combined media. Lithographs, etchings and aquatints have individually and in series lent themselves to his illustrative facility. Among the themes are : POOLS, PORTRAITS and STILL LIFES.

Hockney did numerous paintings, lithographs and drawings of Geldzhaler.

Time and again, the artist longs for the isolation of his small house in Malibu Beach. He paints the ocean. "The waves come right up to my window. Once again I am aware of an enormous space. The house is small, with very comfortable rooms, and outside is infinity." 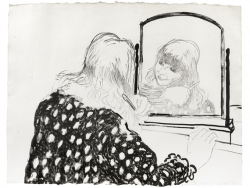 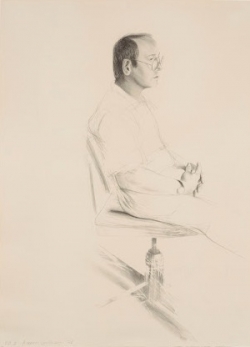 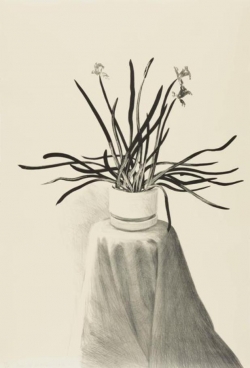 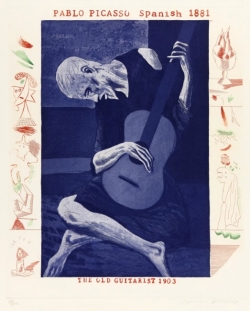